As a Dietitian I am seeing more and more people with Parkinson’s wanting to know if changing their diet can help their symptoms. To answer this question let’s first explore more about Parkinson’s and how it can affect your body.

On average, 38 new cases of Parkinson’s are diagnosed in Australia every day. And, it is estimated that seven to 10 million people worldwide live with this condition.

Parkinson’s is a disorder of the central nervous system that occurs when brain cells that make dopamine, a chemical that coordinates movement, stop working or die. As the table below illustrates, symptoms are not just limited to movement, they are characterised by both motor (movement) and non-motor symptoms and are different from person to person. 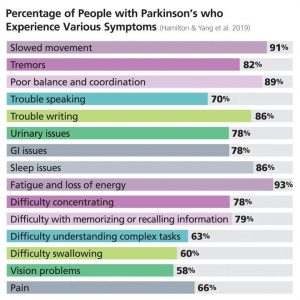 In addition to motor symptoms, you can also experience other health problems related to Parkinson’s. These problems are diverse and are known as non-motor symptoms and can develop years before motor symptoms.

Certain non-motor symptoms such as constipation and slow stomach emptying can impact the absorption and effectiveness of levodopa. Levodopa improves motor symptoms for the majority of people with Parkinson’s so ensuring optimal absorption is important.

So, can diet help Parkinson’s?

Yes. Absolutely. Making changes to your diet can help manage some of the non-motor symptoms associated with your Parkinson’s. In particular, changes to the way you eat and drink can help deliver levodopa to your brain in a more consistent manor which in turn can help your motor symptoms. Research suggests high adherence to the MIND diet is associated with slower progression of parkinsonian signs with more moderate protective associations observed for the Mediterranean diet. A ketogenic diet has been shown to improve certain symptoms of Parkinson’s in several small studies. The great news is that research in the field of nutrition and Parkinson’s is growing and ongoing so watch this space.

Can the ketogenic diet help Parkinson’s?

Emerging evidence supports the use of the ketogenic diet against a variety of neurological disorders including multiple sclerosis and Alzheimer’s. But what about Parkinson’s? Is there a potential place for …..read more

The symptoms of Parkinson’s are not just limited to movement, they are characterised by both motor (movement) and non-motor symptoms and are different from person to person. Non-motor symptoms like …..read more

Can the MIND diet help Parkinson’s?

The MIND diet aims to promote brain health and has been associated with slower cognitive decline and with decreased risk of developing Alzheimer’s disease. But what about Parkinson’s? Is there …..read more

This site uses Akismet to reduce spam. Learn how your comment data is processed.